The Honolulu Gay & Lesbian Cultural Foundation is proud to announce that it is a member of APQFFA, the Asia Pacific Queer Film Festival Alliance. 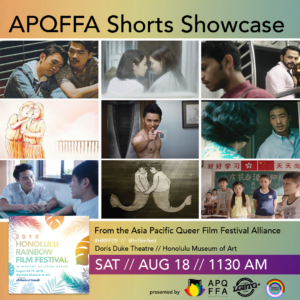 APQFFA’s mission it to enhance the visibility of Asia-Pacific queer cinema and support voices in diverse queer minorities that face unique struggles in each country. APQAA also seeks to highlight young talents in the Asia-Pacific film industry and to share and exchange information with its member to assist each other in curating diverse content.

Learn more about the films we’re presenting at the 2018 Honolulu Rainbow Film Festival in partnership with APQFFA. Just click on the image.

online rx online-drugs-store.net/buy-doxycycline-online-cheap/
We use cookies to ensure that we give you the best experience on our website. If you continue to use this site we will assume that you are happy with it.OkNo
Revoke Cookies